On the brink of the new school year, most schools in Criuleni have debts of thousands of dollars and some -even millions; they are at the risk of reaching the court. The debts date back three years ago when the district authorities have approved a project by which schools were forced to replace all doors and windows. The works were made in advance and the debt was supposed to be paid within 3 years. When the term expired, the company claimed the money which was invested, while headmasters said  that they did not have money. The money  for project funding was earmarked from the so-called district division for education, a joint fund of schools for  which each institution allocates up to 3% of their budget. This money can be used for capital investments and other expensive works, but also  for emergencies. As for schools in Criuleni, this amount does not exceed 5-6 million lei a year. Meanwhile, the sum of the contract  for replacing  doors and windows amounts to 33 million. Thus, the term of three years to pay for the work was impractical from the start.

Three years after signing the contract, the schools have debts amounting to 13 million lei. In these circumstances, the schools have to pay for doors and windows for at least next three years, while the term of project development expired in 2016.

Winning company founded some days before

Doors and windows in schools in Criuleni were replaced in accordance with District Council Decision dated  12 June 2013. An official reply sent to the Center for Investigative Journalism by Criuleni District Council writes that the project is funded from budgetary sources, and its cost rises to  33.8 million lei. The implementation period is three years. The tender was held on 5 August 2013 and winner was declared SRL "Inventconstruct", a company registered in late July of the same year, ie, just days before the procedure takes place.  Under the contract signed with the district administration and school managers, the company committed itself to complete works within 90 days. The works were completed in advance, and the schools had to pay their debts in installments over a period of three years from the date of concluding the agreement.

The agreement provides a guarantee of 25 years for casements’  installation and for PVC windows- the guarantee term is 10 years.

According to data from the tender.gov.md,  SRL "Inventconstruct" won energy efficiency projects. One of these, worth 11 million lei, was implemented in district Orhei. Another contract worth 3 million has been awarded to the company by the Institute of Mother and Child.

Data from the State Registration Chamber show that SRL “Inventconstruct" is registered in an apartment in the center of the capital, and Irina Besliu and Grigore Zaharia are founders and managers of the company.

The agreement with schools in Criuleni is signed by Vladimir Ivanenco, the then director.

The company has  license to perform  activities of  construction of buildings and / or engineering facilities, installations and utility networks, consolidations and restorations and  for designing works  for all categories of construction.

Though "Inventconstruct" won the tender, one more company "Arexim Grup" SRL, registered in 2009, was involved in project implementation. The two companies have concluded an association agreement by which they shared the contribution to project development. "Arexim" assumed 28%, while "Inventconstruct" – 72% of the works.

„Sum of the agreement increased overnight”

Current president of district Criuleni Iurie Andriuta was a councilor when the decision on replacing windows and doors was adopted. He said that when the idea for this project appeared, the amounts were smaller.

"Initially, they spoke about 7.5 million but  then the project was  worth 33 million lei. I proposed to do the work in stages that is to replace first windows that are damaged and wind is blowing, etc. I was against it because the schools were supposed to pay for the debts for many years to come", says Andriuta. He underlined that he has ordered an expertise of works and this shows that in some cases the quality of work leaves much to be desired.

„13 million is a huge sum of money, especially in this period of poverty.  As for quantity- all requirements were respected but the quality is poor”, says Andriuta.

Project in the attention of the Court of Accounts

The project of windows and doors’ replacing is in the attention of the Court of Accounts.  A report that relates to the public patrimony management by authorities in the district in 2014,  shows that they operated inadmissible amendments in the agreement. "They did works which were different from the contracted works totaling 596.5 thousand lei and they have not complied with the stipulations (...) prohibiting modification of any new element of the contract signed or introduction of some new elements,  if such actions are likely to alter the conditions of the offer that constituted the basis for selecting it and increase its value ", writes the report. However, the document of the Court of Accounts shows that public authorities in Criuleni broke the law when they have ensured the expertise of constructions by technical experts at acceptance upon completion of works.

Directors complain about the quality of works

Meanwhile, the directors of many educational institutions in district Criuleni say that the project is necessary, but there are some problems  in terms of quality of works. 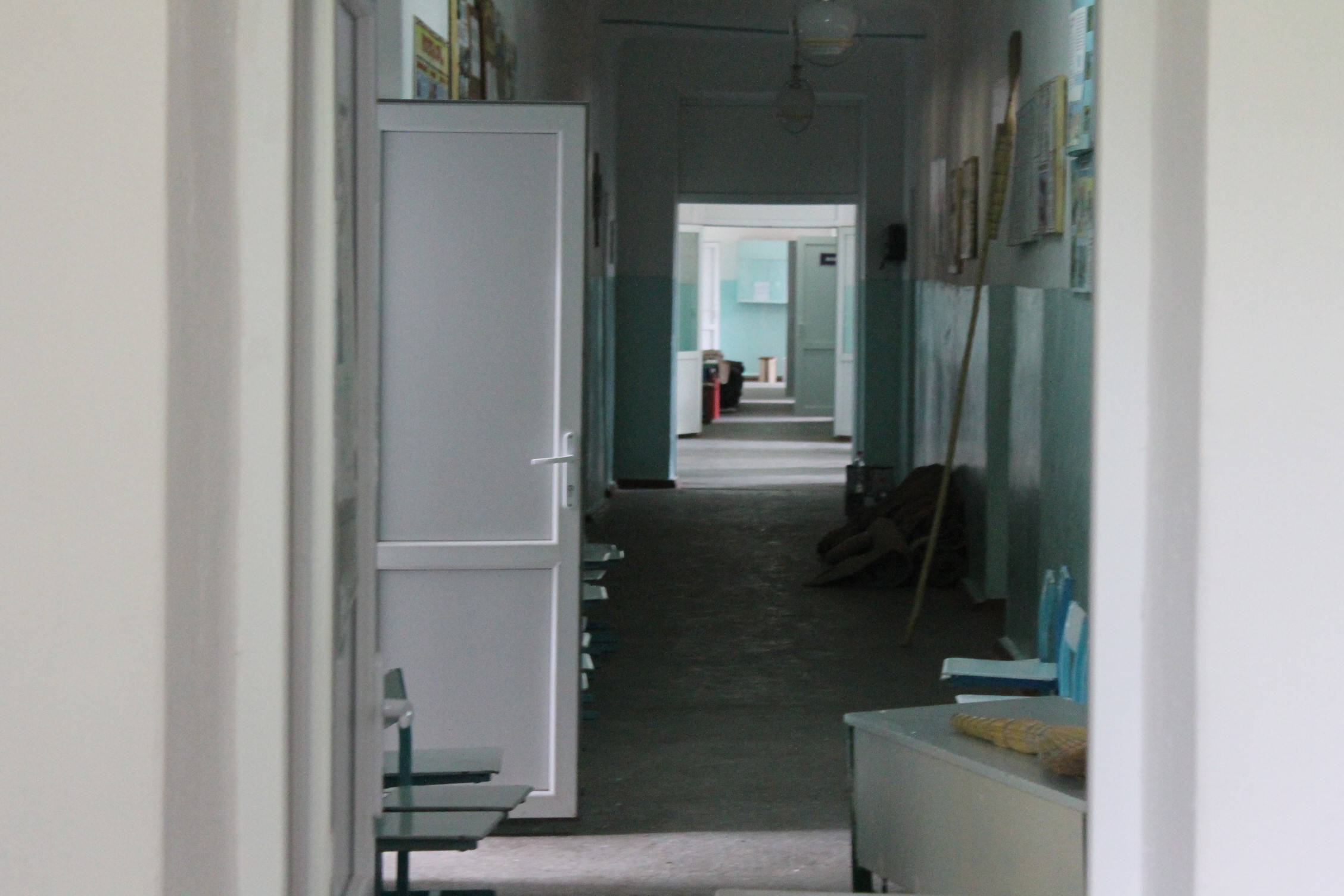 All 68 doors were replaced in the gymnasium in village  Corjova, because the old ones had not been repaired since 1969. However, the old ones resisted a long period of time, says the director of the gymnasium  in Corjova,  Ecaterina Crismariuc, while new doors  break within three years after they were installed.  She invited us  inside the building to show us why she was unhappy with the quality of works.

"Look here, it cannot be closed ", shows the head of the institution. Former carpenter of the school, Ivan Demciuc helps us; he is currently responsible for servicing of the building. He says that the doors began to break down one after another shortly after the company left: "They made fast the work and left. Quickie! The doors do not close well. Some of which I've set, but there are others whose parts broke, especially the hinges and I cannot repair them. We do not know where to get parts. "

In her turn, director says that she found a temporary solution- the parts of doors which are rarely used, are removed and installed at mostly used doors. „And that is not all!, says Ecaterina Crismariuc.

According to her, the institution has a debt to the company that installed the doors. „ We have a debt of 300 thousands or 400 thousands lei. We have never had problems with the windows though they were installed before the doors. The mayoralty installed them in the period when it managed the gymnasium. We have big problems with the doors. The  front door is OK but the doors inside the building break, are of poor quality”, says the head of the educational institution.

Each door cost 10.000 lei, total budget exceeded the sum of half of million.

„It rains inside and the windows risk falling”

A sum of 760 thousands lei was spent at the Theoretical Lyceum in village Malaiestii Noi. The new director of the institution Mariana Cotoman appreciated the quality of works as “very bad’. „First, the windows do not open. The same for the doors”, she said. The most serious problem is that it rains in the classrooms, she says. „It has rained a lot and I teach in the classroom on 3rd floor. When I entered the classroom, there was water on the floor”, says  Mariana Cotoman. She says that the polyurethane foam was not processed, that is why, the windows risk falling. „ The foam is burnt by the sun and the birds come and peck it.  The windows can fall because if the foam is not processed, it can fall”, says the head of the institution.

Valentin Jardan, head of household at lyceum in Malaiestii Noi says that there are problems mainly in the block that hosts the gym.  „ Heavy rain causes problems. The company said that we were supposed to do the works as the company did not get money for it”,  said Jardan.

One door was changed on the hall from ground floor in the lyceum in Balabanesti.  A small sum of money was earmarked to this effect - 12.670 lei. Maria Calancea, director of the gymnasium, says that the institution did not submit claims to the company. She thought that the school administration must liquidate the drawbacks. 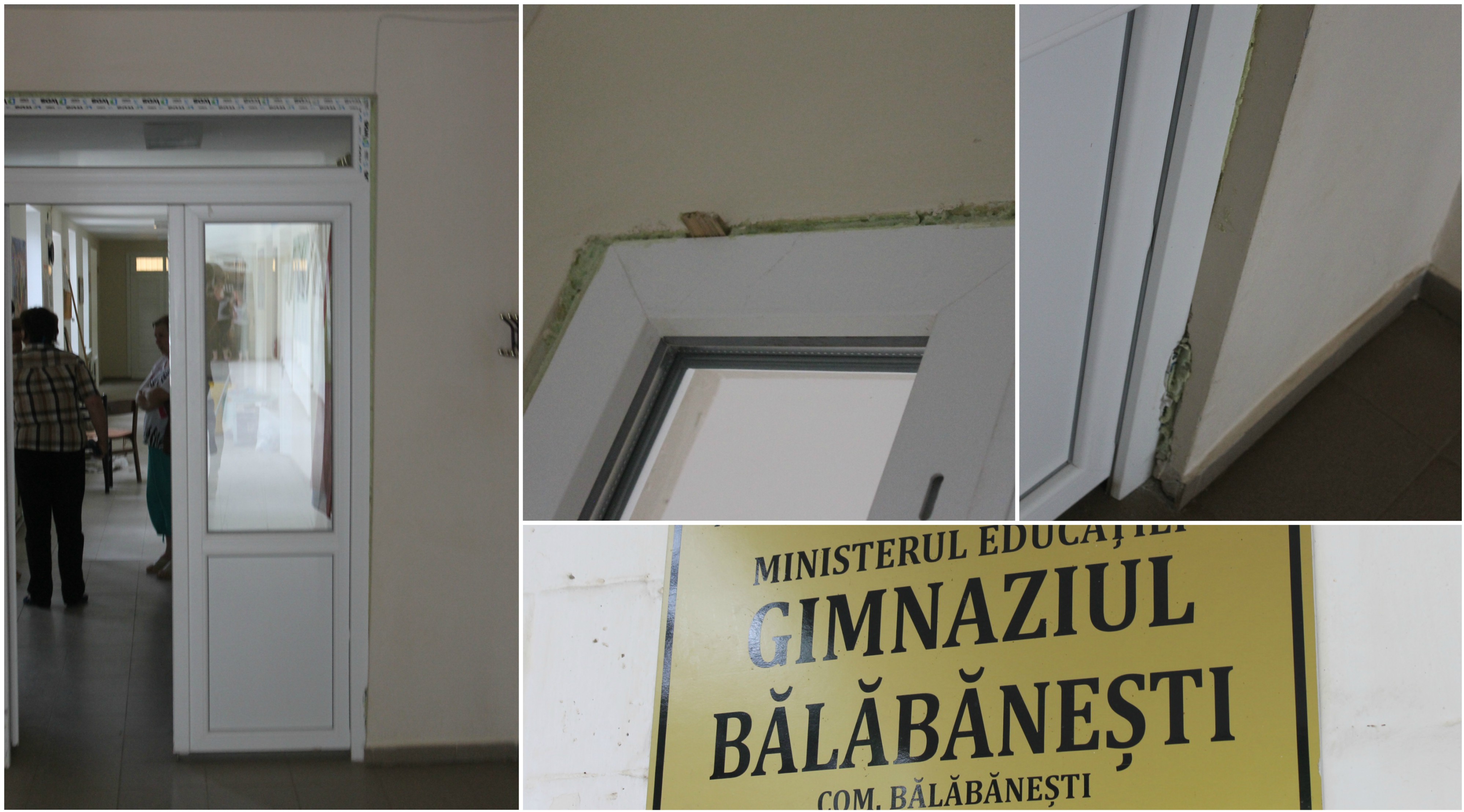 „We saw this and we were supposed to do it after the hall is repaired. Perhaps it is our fault that we did not repair”, said Calancea.  She said that the windows and the rest of the doors were installed in 2010, within some projects of the Social Investments Fund (FISM).

Some headmasters are not happy with the project 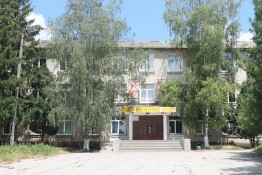 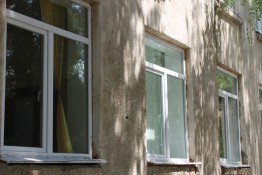 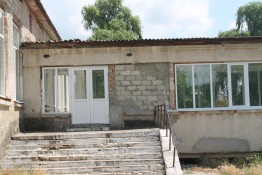 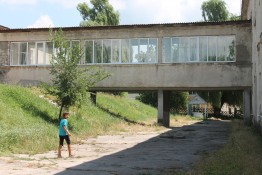 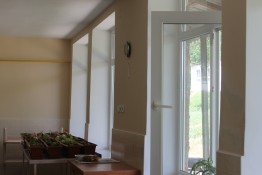 There are managers who are happy with the works, just because the old windows and doors were replaced. A sum of 2 million was earmarked to replace all windows and doors in village Izbiste. The front door was not replaced as it is made of wood.  Natalia Rusu, deputy-director of the gymnasium in the village said that immediately after the company installed the windows, a group of workers in the locality covered the holes after the cases were removed. „Owing to this fact, it did not rain in the classrooms and the walls are not moldy.  My colleagues from other institutions said that the walls were moldy, it rained inside”, said Natalia Rusu.

Lyceum in Izbiste has a debt of over 1.5 million lei for windows and doors, money which the institution does not have. The institution received a summons of being sued if it does not honor its debts within 10 days.

Requested by journalists from CIJM, representatives of the company „Inventconstruct” confirmed that the schools had debts for reparation works. Irina Besliu, one of the founders of the company said that the enterprise performed all works but did not get all money so far. As for the quality of works, she did not want to comment on it.

The investigation has been done in the framework of the Campaign „Public Money Is My Money Too”, conducted by the Centre for Investigative Journalism (CIJM) and the Association for Efficient and Responsible Governance (AGER), within a project funded by the European Union and the National Endowment for Democracy.