Bait in the legal profession. How the guild was fooled

Around 300 lawyers were tricked by some individuals who, pretending to represent a law firm, promised to include them in the so-called the honorary book of lawyers, in exchange for several thousand lei each. Next to the former and current management of the Lawyers Union, controversial individuals made it into the album as well, which displeased the guild. The case made it to the law enforcement's attention. While the author of the scheme is wanted by the police, the Union's management denies any involvement.

The honorary book of lawyers, printed in July 2015, contains the names of 300 defenders from all over the country. The achievements of each individual are showcased in a short biographic text, accompanied by pictures at the office and in robes. The album starts with a “biblical aphorism on the legal profession” from Ppriest Igor Martin of the All Saints Church and with an introduction signed by Gheorghe Amihalachioae, the former president of the Lawyers Union. He writes that this is the first edition and it includes useful information about the “representative members” of the Union. “We are aware of the fact that the intelligence, talent, vocation, knowledge and service quality of the lawyers included in this book describe other colleagues that contribute to the settlement of disputes in court as well”, notes Amihalachioaie in the introduction.

The controversial individuals in the Honorary book

Famous names of the field made it into the book pages, but so did several people with controversial pasts. Among them is the star-lawyer Valerian Mânzat, known for the luxury he brags about, and sentenced to prison in May for staging a road accident. Eduard Revenco, the dean of the Bălți Lawyers Bar is included in the book too. He was sentenced and fined last year for influence peddling. We also find Gheorghe Avornic there, member of the Superior Council of Magistracy, and owner of several companies in Romania, about which the media wrote several times, his colleague from SCM, Teodor Cârnaț, who made a big fortune from several real estate businesses, Raisa Apolschii, MP from the Democratic Party, the leader of Liberal Party – Mihau Ghimpu, etc.

Lawyers: “It is a business”

Several lawyers state that they heard about this compilation a year ago, when some alleged representative of a company knocked on their door and offered to have their picture taken. The man claimed that it was a joint project with the Lawyers Union of Moldova.

They told me I had been selected by the Union to appear in this compilation, together with many other lawyers. I didn't know who else was to be included, but the president of the Union at that time, Gheorghe Amihalachioaie, had confirmed the information to me. The photographer came and gave me an email address to which I had to send a few words about myself”, lawyer Violeta Gaşiţoi says, specifying that the book was to be presented to them the same year, on Lawyer's Day. Shortly after, another person requested 2,500 lei as fee for being published. After seeing a first draft in electronic version, she refused to be published in the book. “I understood there were no criteria for selection of “honest” lawyers”, Violeta Gaşiţoi states.

Lawyer Vitalie Nagacevschi was just as revolted, qualifying the situation as a “business project”. He was asked to pay 2.000 lei. “I told them I didn't need a book that nobody knows about and that I have to pay for. Who needs it? Who's going to buy it? Business, nothing else!”, Nagacevschi says.

Valerian Mânzat though, had paid 2.200 lei. He said he was called by a certain Ion, who introduced himself as representing Gheorghe Amihalachioaie. “I just gave him the money and that's it”, he says. 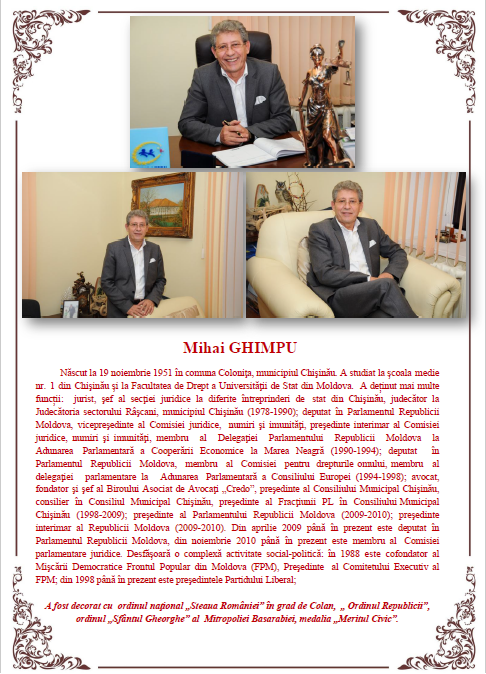 The album, as a matter of fact, has the Lawyer's Union logo on the cover. Shortly after discussions regarding the credibility of the publication started among the public, the institution posted on its website that “it is not connected to any actions related to the publication of the so-called honorary book”.

Nina Lozan, the current president, and back then Head of the Commission of Licensing for the Legal Profession, says that she was notified just like everyone else and invited to a photo shoot. “The representatives of the company were to present us with a final version for approval. They didn't come, and we found ourselves hearing that lawyers were writing complaints and that they were asked for money. The Union did not pay anything and we have no connection to the entire affair” Nina Lozan told us.

“How can the Union say that they don't know anything if even the current president is in it too?” Valerian Mânzat.

Gheorghe Amihalachioaie admits that there was indeed such a project, but, that after all, those who came with the idea just ran the riot. “Some company came with a proposal: ‘There is a Prosecutor’s Honorary Book, do you want one?” We consented and agreed they would develop a book model. We decided who was going to be showcased: lawyers from the council, from the permanent commissions, the veterans, the deans, etc., and all the people with good reputation. The final draft of the concept was presented to us at the Union's congress. However, they showed us one version, and what got to the publishing house was something else” the former president of the Lawyers Union emphasizes. He also admits that, after all, many lawyers with stained past have made it into the alleged album of honour, lawyers that had been under criminal investigation, prosecuted or sanctioned. „They included whomever they wanted, without consulting with us. This is why, at the Council we refused to sign the contract. This is a hoax,” Amihalachioaie insists. 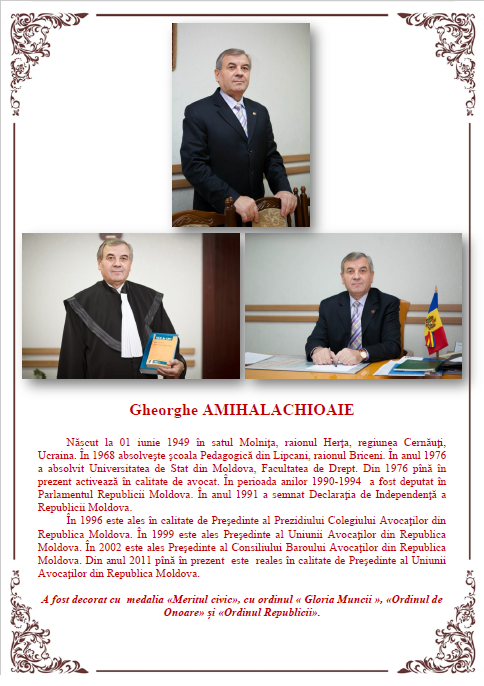 Universul Publishing House: “The product is ready, we’re waiting for the money”

The album was printed at the „Universul” publishing house in July, in 510 copies. A copy costs 334 lei. An employee from the marketing and sales department recalls that several months ago, a man who introduced himself as Vasile came to the publishing house, accompanied by Gheorhe Amihalachioaie. „After coming to an agreement, the man took the contract with him and brought it back another day, already signed and sealed by the company. We haven't met the director or the manager” the employee specifies.

For now, the whole lot is at the deposit, awaiting its owner. „After they took two books and confirmed that they very much liked the final product, nobody came to pick up the goods, and we're still waiting for the money. They said just last week that they were going to come get the first 100 copies, but nobody showed up. We hope they will honour their obligations”, the representative of the publishing house specifies.

The employee of the „Universul” says it is Totaro International Ltd. According to the data from the State Chamber of Registration, the company was registered on 22 October 2012, with the office on Alexandru Bernardazzi str. in Chisinau. Officially, the manager is Biase Totaro. The company has another office in Iasi, Romania. According to the Ministry of Finance from Bucharest, the company was registered in July, 2013 on 10 Garii str. Officially, the company works in residential and non-residential buildings construction. We tried to get in touch with the representatives of the company. However, their phones are disconnected, and certain phone numbers do not exist anymore.

In the meantime, the law enforcement has opened a criminal case for swindling, on the case of the mysterious book. This was after two lawyers from the Bar Association filed a complaint to the police in August. According to them, they were approached by an unidentified man who introduced himself as employee of the Bar and asked for 600-700 lei from each to include them in a lawyers album. Later, it was discovered that, in fact, the Bar has no such employee and does not intend to publish any book” says Valentin Costea, Head of the Criminal Investigation Division at the Botanica Police Inspectorate. According to him, the identity of the suspect was established, but the law enforcement officers haven't found his trail yet.

This investigation has been produced as part of the “Shining a Light on Corruption in Moldova” Project, implemented by the Centre for Investigative Journalism and Freedom House, with the financial support of the Ministry of External Affairs of the Kingdom of Norway.