New Airline in the Pocket of the Minister of Justice

A new airline will operate in Moldova as of May 2016 and will transport passengers to several European cities. The company was registered last autumn and has as founders Maria Cebotari, wife of the current Minister of Justice, Vladimir Cebotari, while his sister, Mariana Tabuica, would be the new executive director. The Minister confirmed that his family started a new business and it's just a way to earn a living. "Just like any citizen of this country, I cope with problems", says the official who gets a monthly income from ministerial activity of about 16,000 lei. 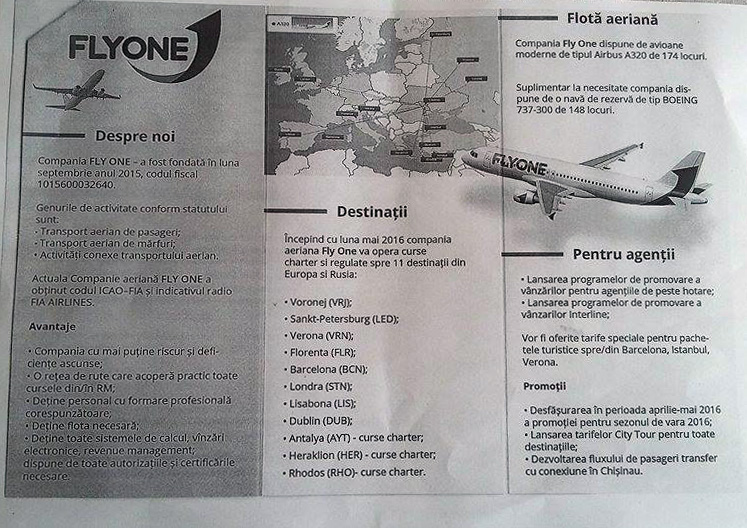 Initially, Fly One promises flights to 11 destinations in Russia and Europe: regular flights to Voronej, Sankt-Petersburg, Verona, Florence, Barcelona, London, Lisbon, Dublin  and other charter flights to Antalya, Heraklion and Rhodes.  The leaflets distributed at the presentation of the company on March 31, in a hotel in the capital, wrote that the company has staff with appropriate training and necessary air fleet - modern aircraft Airbus A320 with a capacity of 172 seats and a reserve aircraft Boeing 737-300 with 148 seats.

Though it was registered on 30 September 2015, the company Fly One SRL is not yet in the list of operators certified by the Civil Aviation Authority of the Republic of Moldova, last updated on March 30.

According to the data of the State Registration Chamber, Fly One SRL has its office  at Boulevard Dacia Chisinau 80/3, address  of the Chisinau International Airport, several airlines, Airport Handling SRL and Airport Catering SA. The company, with a registered social capital of 500,000 lei, was founded by three people; one of them is Maria Cebotari, wife of Justice Minister Vladimir Cebotari, with a shareholding of 40% (200,000 lei). This new business was included in the latest statement on property, for 2015, published recently on the website of the Ministry of Justice. Executive Director of Fly One would be Mariana Tabuica - sister of the minister and former financial director of the State Enterprise Moldatsa.

Tudor Carabadjac, teacher of PE and former director of the gymnasium in Orac village, district Leova shares 40% from this SRL. In 2011, he was elected district councilor in Leova, on the lists of the Democratic Party in Moldova. According to the income statement for 2014, the teacher gained 61.111 lei from the activity of director, has 3 plots, a house with a surface of 100 square meters and a car Dacia Sandero, 2013, bought at the price of 147.000 lei in the same year. Contacted by Anticoruptie.md, the man said: "It is none of your business. Good bye."

The third founder is Nicu-Adrian Berla with a 20% share. He is the manager of the enterprise. Berla is known in Romania as one of the shareholders of the company Fly Level, specialized in pilotage training and training of flight attendants. The school was founded in Bucharest by businessman Silviu Prigoana, former Romanian MP and founder of the Romanian TV channel Realitatea TV. He gave up on his shares in the company when he was elected MP. In 2011, Fly Level SRL opened a school of aviation in Chisinau. A year later, the representation in the Republic of Moldova reported sales revenues worth 581.700 lei. According to data available on the website of the Public Procurement Agency,  Fly Level provided charter services worth 331.824 lei to the State Chancellery in 2012.

Cebotari family, with experience in aviation

Currently, Vladimir Cebotari is a justice minister, but he is best known for his work in aviation, where he was one of the best paid managers employed by the state. In 2012, he received an annual salary of 800,000 lei from the activity of managing of AIR Moldova, Chisinau International Airport and the Civil Aviation Authority.

Also, Mariana Tabuica, official’s sister, received a high salary from the activity of financial director of the Enterprise Moldatsa (Moldavian Air Traffic Services Authority), an aero navigation provider in the Republic of Moldova, called the nursery where several relatives of state officials were employed. Center for Investigative Journalism previously wrote about the fact that during 2014-2015, she benefited from an unjustified pay rise in salary by 373,000 lei and a salary increase of 20% (75,000 lei) as "compensation for discretion." Auditors of the Ministry of Transport and Road Infrastructure (MTRI) found that in 2014,  Moldatsa manager, established the irregular monthly benefits worth ten million lei. Employees received one time benefits (!) for activities included in their job obligations such as attending various meetings, the annual inventory or participation in annual meetings and Tabuica received 63,000 lei.

After the audit carried out by MTRI was published, she resigned. Her name also featured in the press when together with her husband, Andrei Tabuica, were accused of having cheated several people, through companies. They promised the construction of attic-like apartments.

Otherwise, Vladimir Cebotari  has been in the attention of the National Integrity Commission (NIC)  several times. For example, in 2012, he did not report incomes from shares in 3 companies: SRL Vlaconic (95%), SRL C&V Asistenta (50%), and SRL Neaos, a company specialized in trade with agricultural and industrial machinery, with 15% of shares. In 2014, NIC reported that Cebotari, deputy minister at that time at the Ministry of Transportation and Road Infrastructure did not report in his statements for 2013 the income of his wife, about 6.000 lei, 13 banking accounts with insignificant means and an old car, VAZ, writes the publication Ziarul de Garda. Both cases were closed.

Portal moldovacurata.md wrote in 2014 about the luxury house of the couple Cebotari. It is placed in an elite region of the capital, but it is not registered at the Cadaster, though both of them lived in it. According to data from Cadaster, currently, the house is not registered yet.

In the statement of income for 2015, Cebotari  included the companies which he did not report,  17 banking accounts, 2 loans (one in lei, on Volcanic SRL company,  and another one in dollars on his name), and a car BMW,  400.000  lei,  which he received during his mandate in 2013. As for real estate, family Cebotari owns a plot with a surface of 0,049 hectares, bought in 2015, with a cadastral value of  95.000  lei, a flat with a surface of 60 square meters and 2 houses with 270 and 560 square meters (in construction since 2009). Vladimir Cebotari reported incomes worth over 160.000 lei for last year, from the activity of deputy minister of Transportation, head of the Railway and minister of Justice (over 82.000 lei for a period of 5 years of activity. His wife did not report any incomes.

"I work honestly, legally, I pay taxes and I maintain my family"

Vladimir Cebotari confirmed for portal Anticoruptie.md that his wife was one of the founders of the new airline. “I reported everything in the statement on incomes and properties. Data about the interests of my family are public under the law. Yes, it is true, everything is reported. I confirmed it in the statement. I do not hide anything”, said the minister.

He said that there was not a conflict of interests and it is about a business that allows maintaining my family.

"I accepted the challenge to work for public office, as I believe that I can change something. Just like any citizen of this country, I cope with problems. It's not about any conflict of interests, moreover, there is an entrepreneurial risk for me and my relatives, but this is the way to work honestly, legally, to pay taxes and maintain my family. Public presentation of this information, for all people will create problems to my family, but I will overcome them. It is up to you to approach this topic ", said the minister.

Company representatives, in turn, did not want to give details, though; initially we were told that we would be contacted by the person in charge of communication. "Soon, we will organize a press conference. We are in the process of organization, working process", said the company representative.

This investigation was carried out within the Campaign "Journalists for Transparency in Public Funds Management" organized by the Center for Investigative Journalism, with the support of the Good Governance Program of Soros Moldova Foundation. The donor institution does not influence in any way the subject and content of published investigations.