Criminal case against CIJM journalists for an investigation about how Vlad Filat escaped confiscation of his assets: the prime minister’s friend asks the journalists to reveal their sources

The Buiucani Police Inspectorate in Chisinau started a criminal case against the Center for Investigative  Journalism and the journalist Julieta Savițchi, the author of the journalistic investigation "VLAD FILAT: How his assets escaped confiscation", published on February 18, 2022, on the Anticorupție.md portal . The investigation shows that although the sentence of the former prime minister Vlad Filat provided for the confiscation of his assets, including the seized properties, he managed, through various schemes, to keep most of his assets. The journalists proved that Filat organized and directed these schemes while he was incarcerated.

The criminal trial was started based on a criminal complaint sued by the lawyer Cristina Doagă, who is also a friend of the former prime minister Vlad Filat, the two were seen leaving the same house in the morning. We remind you that Vlad Filat threatened journalists with a lawsuit when they requested his opinion on how he escaped confiscation of his property. The author of the criminal complaint asked the police body that the journalists be criminally investigated for breaking the electronic mail and to present details about the sources they used in the journalistic investigation, especially in the part related to the correspondence between Vlad Filat and different people.

The lawyer of the Center for Investigative Journalism Sergiu Bozianu, who submitted an explanation to the police, said that the criminal complaint has a tinge of extortion, as Vlad Filat's lawyer claims that the journalists hacked his client's e-mail and demands to be criminally investigated.

"Preserving the confidentiality of journalistic sources is very important for media freedom. We can only communicate the source that provided us with this information under the terms of the Media Law, the Law on Freedom of Expression and only when:

a. the criminal file concerns particularly serious or exceptionally serious crimes (the criminal law provides for the maximum penalty of imprisonment for a term exceeding 12 years);

b. all possibilities to identify the source of information by other means have been exhausted;

c. disclosure of the source is absolutely necessary for the criminal investigation.

It is interesting that the lawyer Cristina Doagă complained that the right to secrecy of correspondence was violated (which provides for a criminal penalty of up to 3 years of imprisonment, being a minor crime), and on the other hand, it does not dispute the information published in accordance with the Law on freedom of expression", says Sergiu Bozianu.

The President of the Center for Investigative Journalism, Cornelia Cozonac, claims that the filing of criminal complaints against investigative journalists is nothing more than a form of harassment, pressure and extortion, or Vlad Filat threatened the journalists with a trial from the moment of the documentation, while he didn't even know what the investigation would contain.

"Protection of journalistic sources is a certain right of journalists. This right is also protected by the European Convention on Human Rights, and at the European Court of Human Rights there are several cases in which journalists were protected by this right. The ECtHR said in several cases that the protection of journalistic sources is one of the fundamental conditions of media freedom. Without this protection, sources could be discouraged from helping the media to inform the public about matters of public concern. Consequently, the media's vital public watchdog role could be undermined, and the media's ability to present accurate and trustworthy information could be adversely affected. I believe it's disqualifying for a lawyer who doesn't know these rights", says Cornelia Cozonac.

"The claim that the journalists hacked Vlad Filat's e-mail and divulged details from private correspondence seems aberrant to me, because, as a rule, the subjects of the correspondence are at least two people. The journalists only disclosed data confirming the management of certain schemes through which the wealth that was to be confiscated in the corruption case was hidden", says the CIJM president.

Cornelia Cozonac said that although the journalists presented several evidences debunking the schemes used by Vlad Filat to remove several properties from sequestration, which were to be confiscated, the former official being convicted for corruption acts,  the prosecutors did not start any investigation .

To this effect, the Center for Investigative  Journalism reserves the right to send the journalistic investigation to the prosecutor's office and to ask for the investigation of the documentary evidence presented in the investigation, and for the facts admitted by Vlad Filat and his lawyer Cristina Doaga to be investigated under a criminal aspect.

We are publishing one of the letters from the Buiucani Police Inspectorate through which we are informed about the criminal case and we are summoned to the police. We consider the statement that this document contains personal data and should not be published to be abusive. The data in this act is of public interest and should not be specially protected. 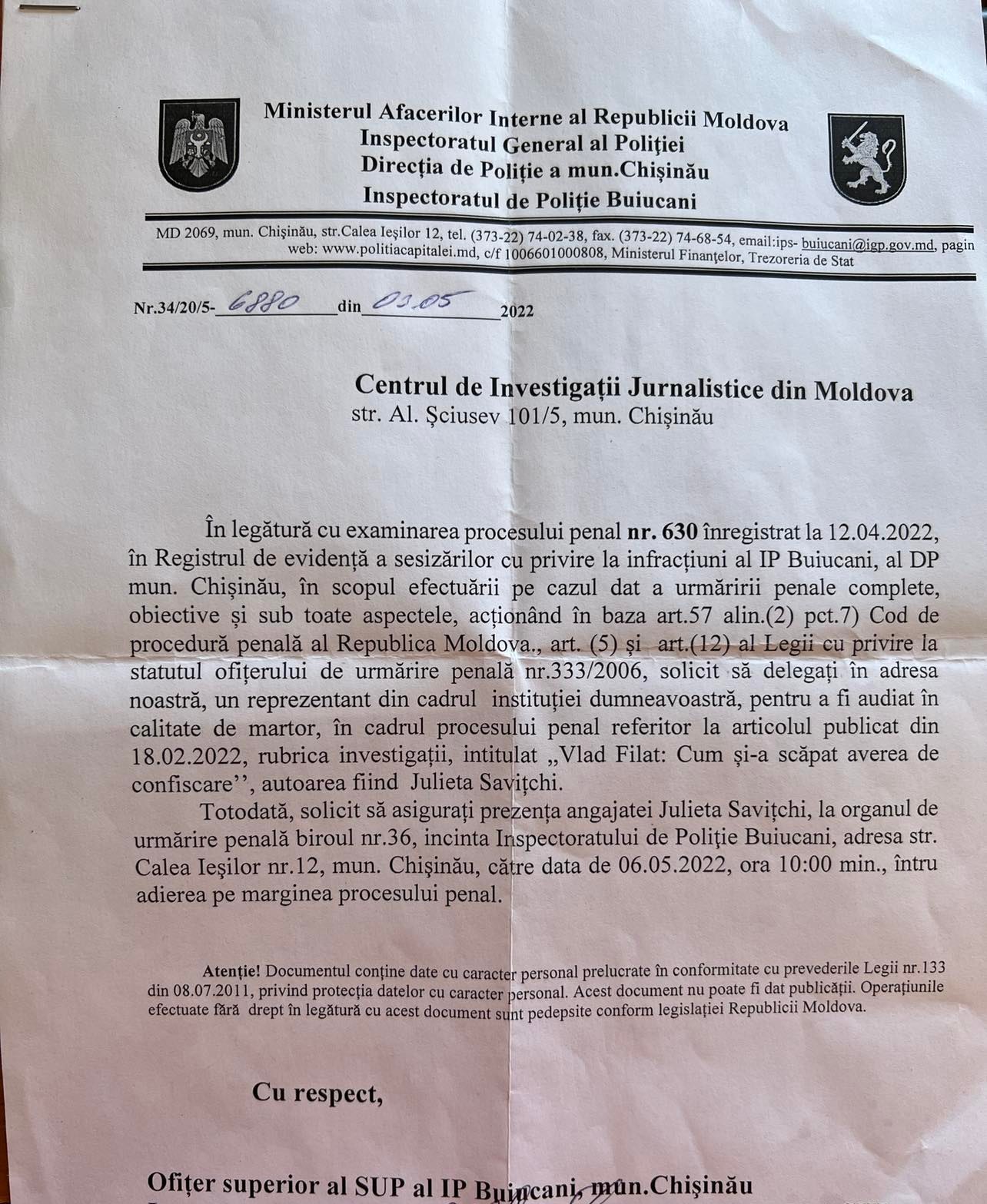